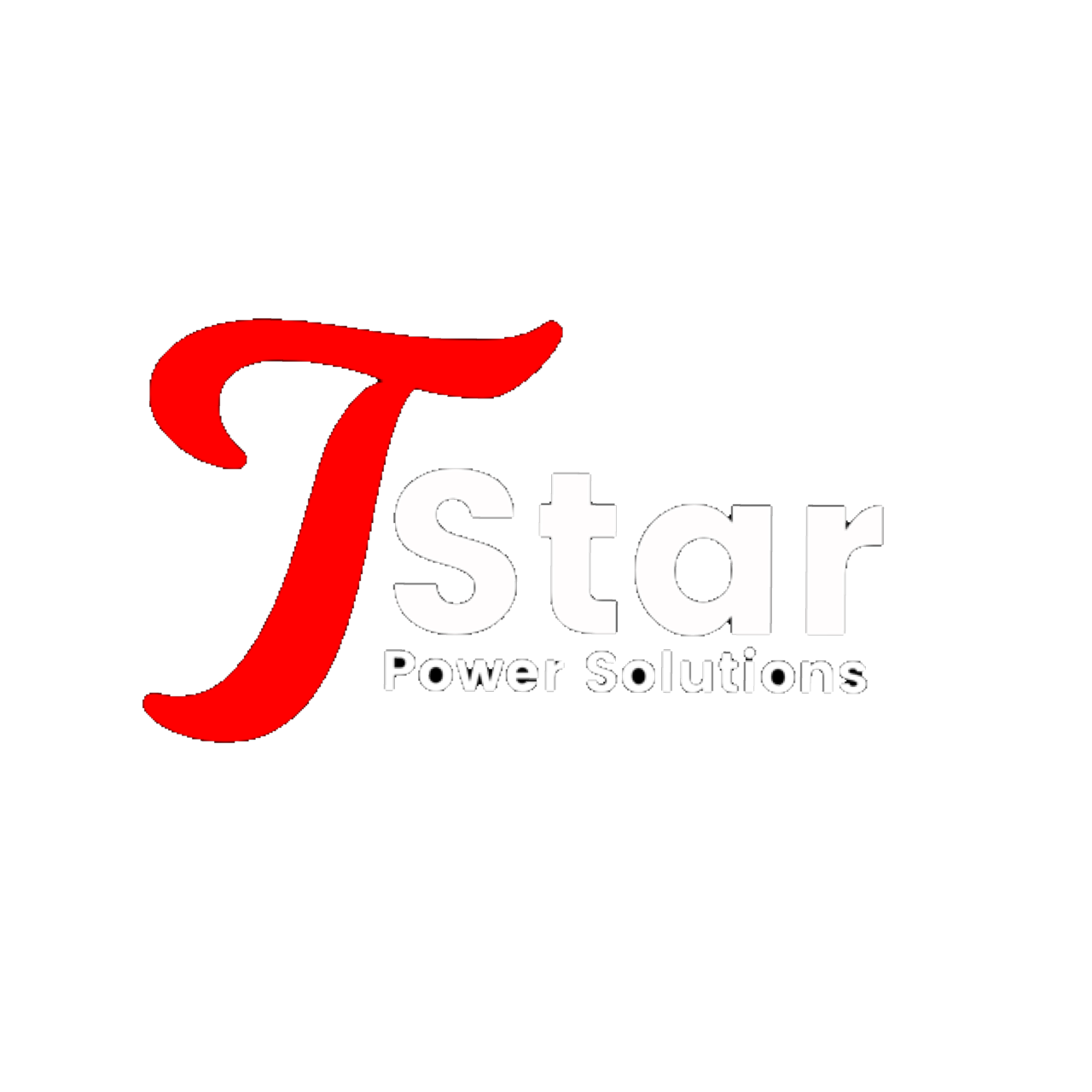 T-Star personnel have customized, built, and installed more than 150 thyristor-switched SVCs worldwide since 1998. Our focus has been on the SVC solution alone, making us the premier specialists in the power correction field.

T-Star's SVC Systems are guaranteed to:
Large Motors and SVCs

The most common way to start motors is to draw the full amount of transient power from the AC power system.  If the motors are too large, the power flow will cause a drop in the power system voltage level, which often extends starting time or prevents the motor from starting altogether.  As a result, large motors often require the purchase of additional motor starting equipment.

A T-Star SVC System is a bus-level solution and can start multiple motors without modification. It's also harmonic-free.

NTMWD's Lake Texoma station began with two 4,000 HP, 4160V pumps.  Due to increasing demand, NTMWD purchased an additional two 6,100 HP, 4160V pumps for the same station. They were specified, quoted, and installed with soft-starters. The soft-start system was unable to start the new motors. After analysis, it was discovered that the power system was not capable of supplying enough power to start the motors.

The solution was a 2-stage, 12.2 MVAr Dynamic VAr system configured by T-Star. It was built, shipped, and installed by T-Star.

T-Star provides ongoing remote analysis and support for maintenance personnel as contracted by the customer.

Pump-starts are critical to ensure water is delivered properly to the water utility. As a result, the customer requested analyses of motors starting.

The following charts are partial excerpts of the customer report.  All data shown is normally recorded and is accessible locally by the customer and remotely by T-Star personnel. 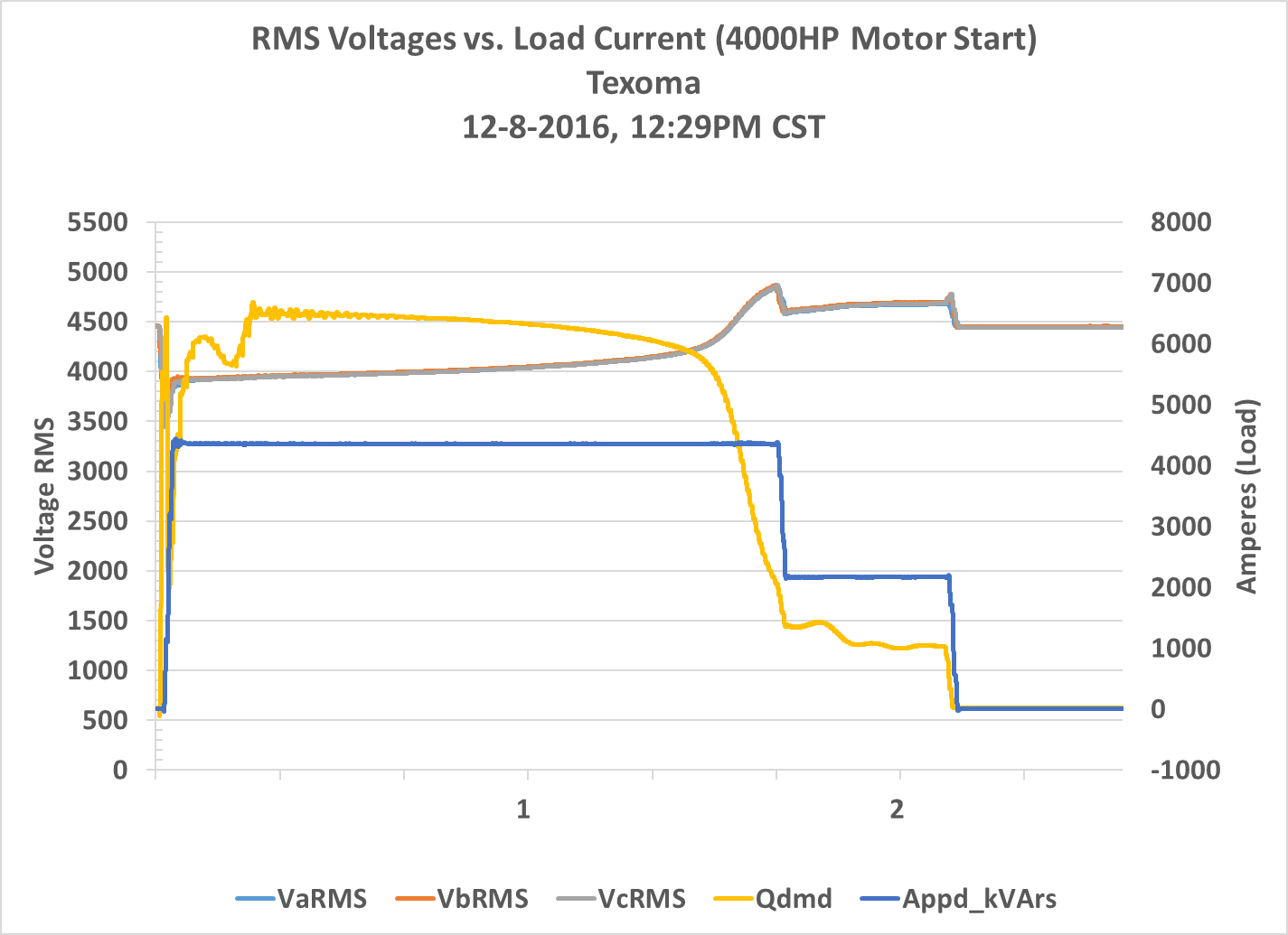 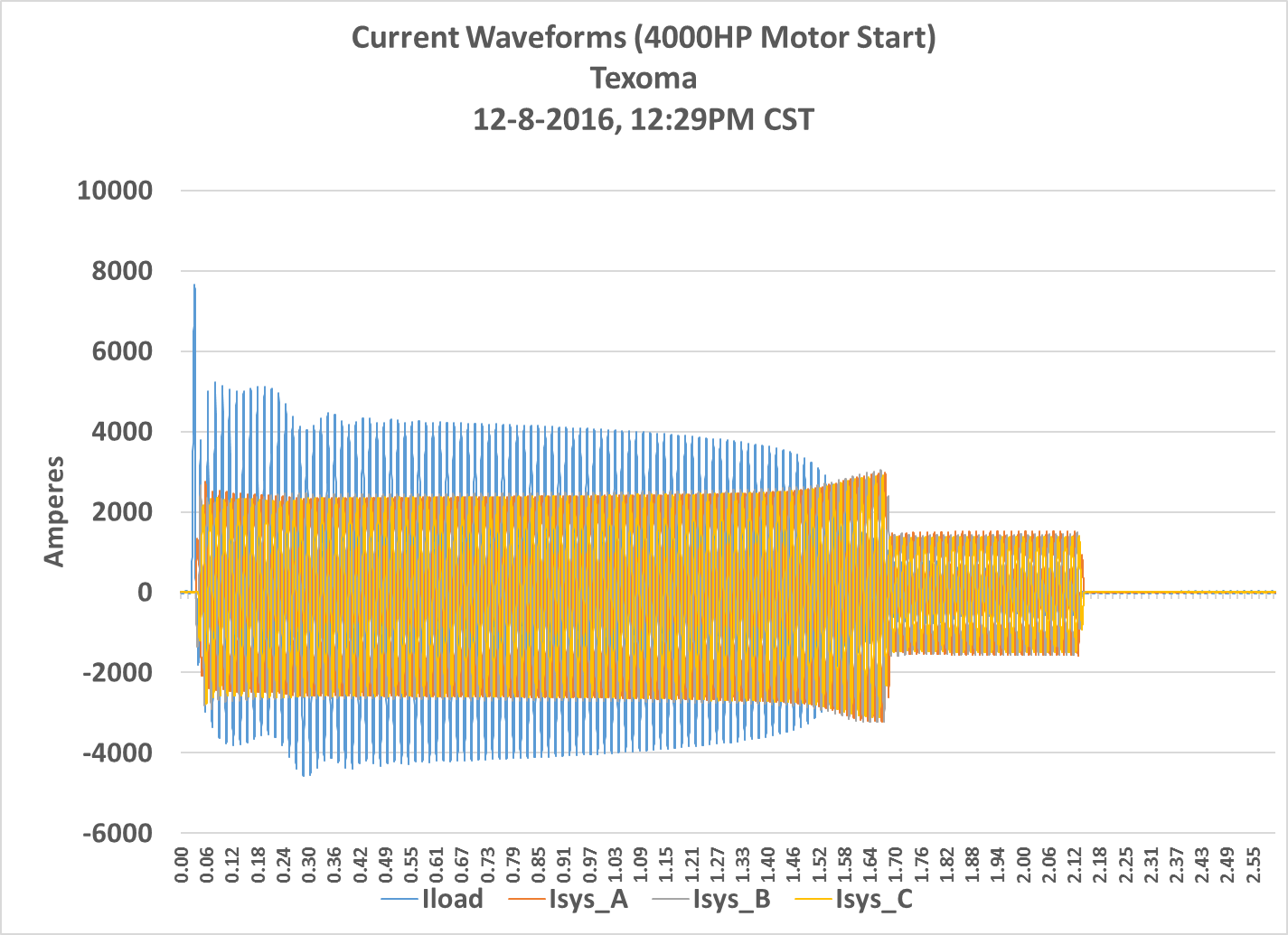 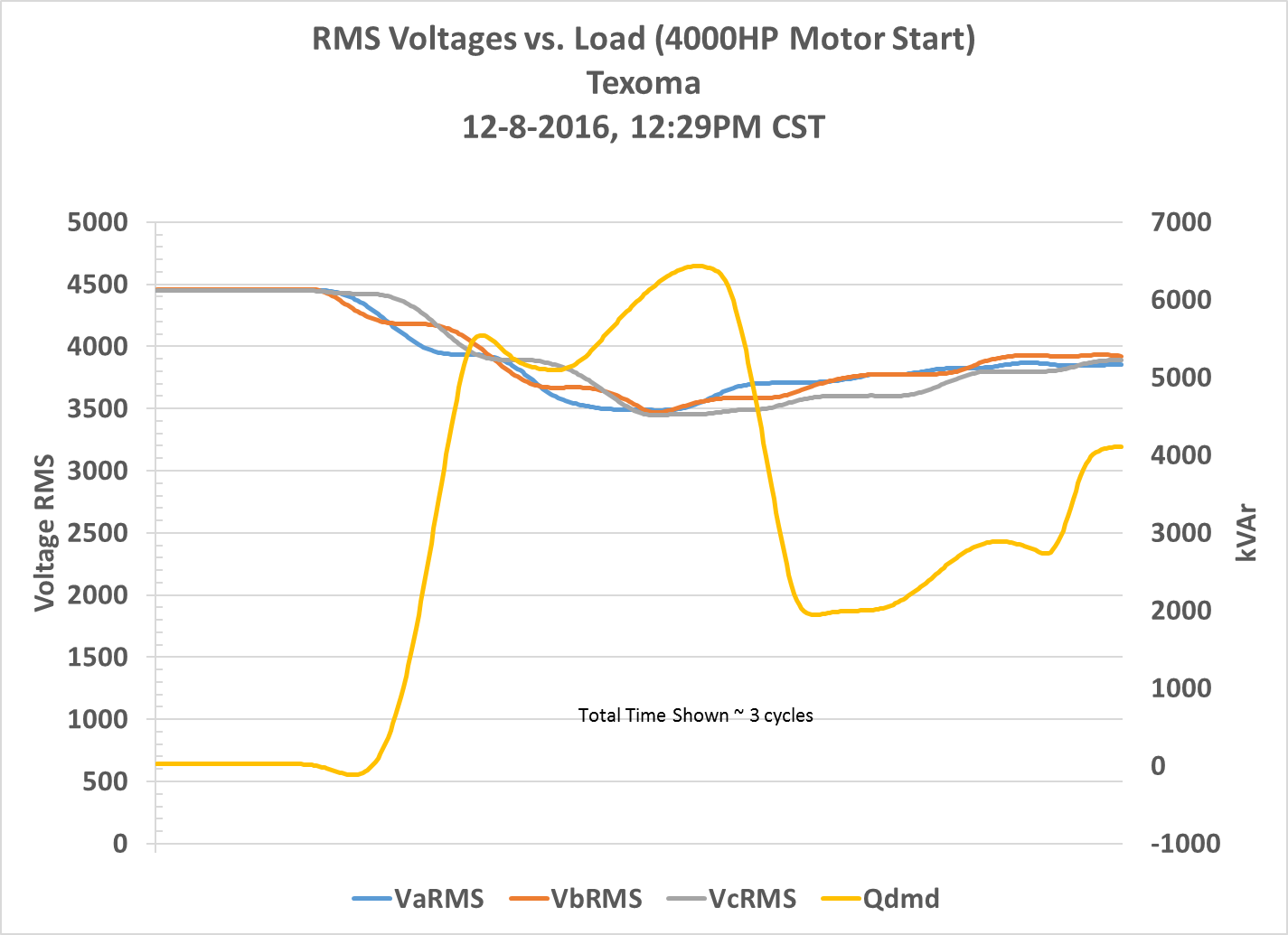 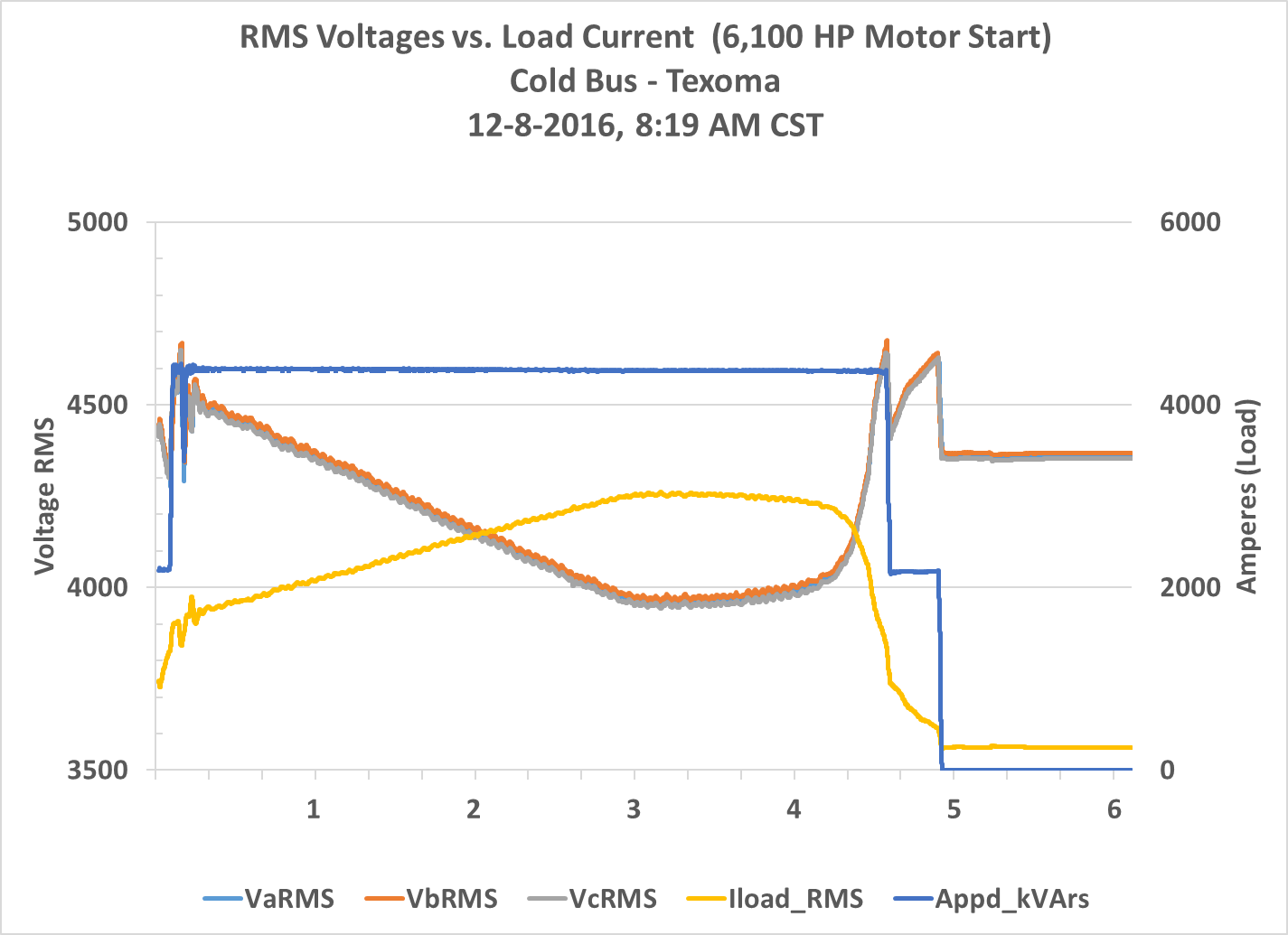 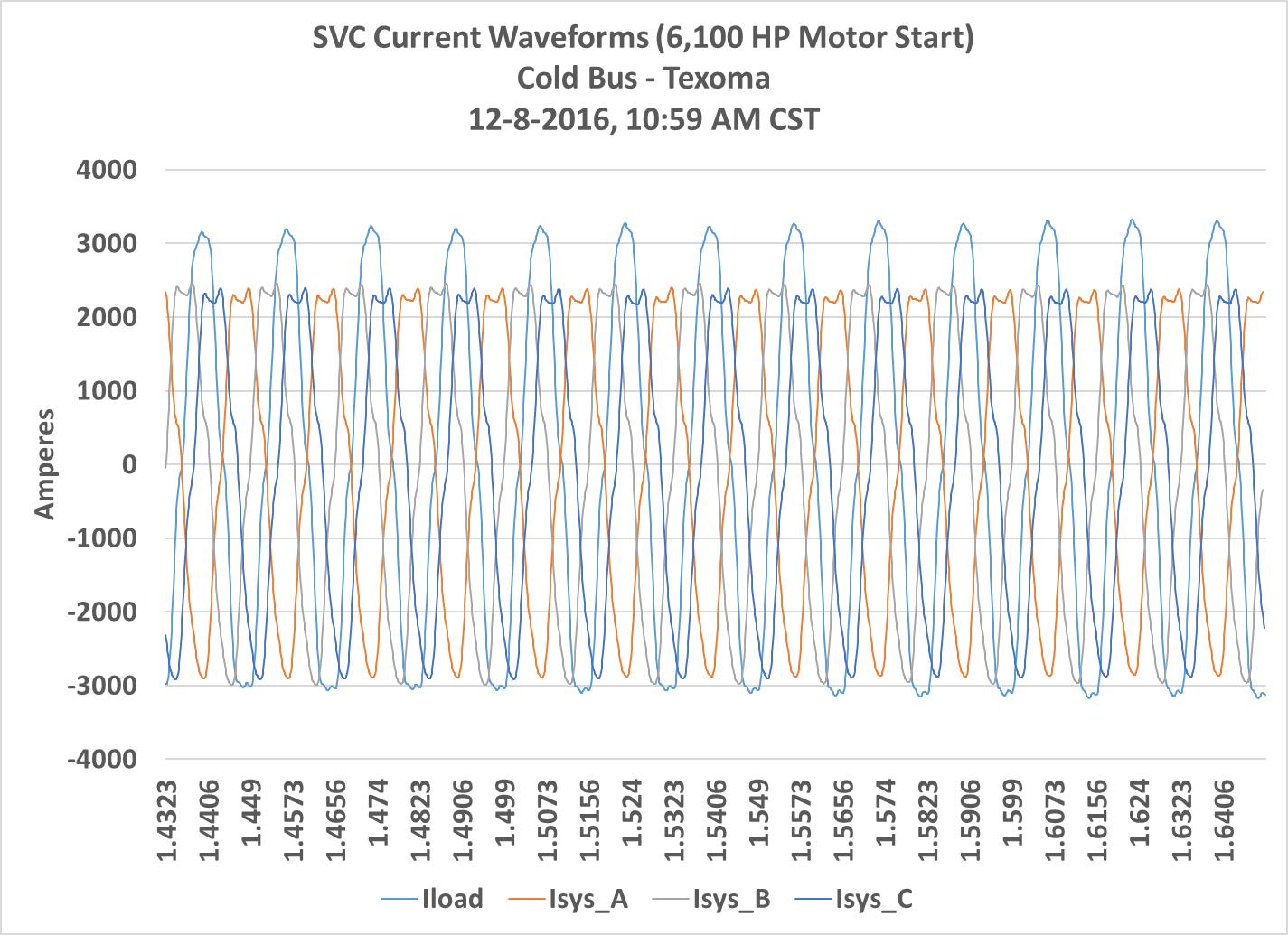 A custom built T-Star SVC system was purchased and installed on the distribution circuit. The sag issue was corrected.

Piedmont EMC needed to figure out where to physically locate the SVCs. Location was an integral part of the process. Their careful analysis led to a few important observations:

Placing the SVC on one or more 12.47 kV buses was studied. Simulations suggested that use of a single SVC system at the closest substation would yield results comparable with individual SVCs at each substation for about half the cost.

Placing the SVC directly on the 44 kV line was considered and discarded as being more expensive. Transformation would be required, and the total price of the SVC system could easily double.

Locating an SVC on the 5 kV bus provided the best isolation due to the impedance between the 5 kV station and the other two Piedmont EMC substations. However, Piedmont EMC had no other 5 kV substations, and a 5 kV SVC would not be reusable.

The SVC selected for this application was rated at 8.4 MVAR, 3-phase, and it provides 7 levels of capacitive support in increments of 1240 kVAR. This step-size equates to a 3.2% step voltage change at nominal voltage, and was chosen using IEEE 1453 and the GE Flicker Curve based on the frequency of the motor starts.

Subsequent field measurements revealed an effective SVC voltage resolution of less than 3% during motor starting. The figure shows the actual results of the starting of one of the pump motors with the SVC in-service.

The SVC unit was installed in 2004. It has never missed a beat. In 2008 and 2016 the SVC control was upgraded and continues to perform reliably today.

Piedmont’s careful consideration of alternative SVC locations resulted in a system with substantial residual value. By taking the responsibility for the SVC’s pad and wiring, they minimized their costs and developed an initial familiarity with the SVC. Much of the routine SVC maintenance is performed by Piedmont EMC line crews.

Piedmont purchased our extended service plan. T-Star regularly accesses Piedmont's SVC data history and checks system performance. In the rare event of problems, we are able to diagnose to the component level for replacement. We gain access to the data remotely.

Frequent and continuous motor loading and unloading occurs in many different industries.

Some processes use DC drives, others use AC motors. While the internal operating differences are significant, the power system effects are similar.

The loading variations always cause corresponding voltage variations on the plant power bus.

Bus Stability and Our SVCs

A T-Star SVC System will:

The two mining operations were located in the same area, approximately three miles apart.  Each used continuous miners to push several AC motor-powered cutting heads into coal seams to remove material. Profitability is proportional to output, and miners push the cutters as close to locked rotor as possible before withdrawing them from the coal-face to regain speed.

For flicker mitigation purposes, each site was modeled as a series of independent motor loads.  The large motors (powering cutter heads) were modeled as motor loads varying from idle to near locked rotor conditions.  The other motors (conveyors equipped with reduced voltage soft-starters) were modeled as randomly-varying loads going from no load to full load.  Steady state loads such as mine ventilation and pumping systems were ignored for flicker analysis, but were included for power flow, power factor, and harmonic analyses.

With one mine in-service, customer complaints began to increase.  A second mining company requested service, and both companies had indicated plans to increase load.  In addition, the REA had also received notice from a third mining operation that was planning to locate in the same area.  All the mine operations would be served from the same 12.47 kV circuit fed from a 46 kV substation.

Considering how to address the flicker, the REA was aware that typically these small mines in Appalachia last three to fifteen years.  Even if reconductoring the 12.47 kV line would yield acceptable flicker mitigation, it would also result in a permanent high ampacity upgrade to a circuit that would have a maximum use of only seven years.

Choosing an SVC, the REA was able to reduce its initial costs and still have a reusable asset when mining ceased. During the planning process, the REA discovered two additional concerns: whether each mine would require an SVC, and the effects of the addition of a third mine on the circuit.

Since the circuit is not dedicated to the mining customers only, other customers are affected by flicker from mining operations. Analysis of the line impedance between mines showed that locating the SVC immediately to the source side of the first mine, and then correcting to levels below the IEC flicker table (Table A. 1, IEEE-1453), would limit flicker at the respective mine entrances to acceptable levels. Thus, one SVC could be used to treat all mining loads.

The flicker caused by the first two mines was addressed by using a 7-step SVC rated at 2.4 MVAR. See the oneline diagram in the figure below.

The addition of the third mine would increase the maximum flicker levels and require a larger SVC than was required to serve two mines. If the third mine came on-line, resulting flicker problems could be solved by designing the SVC for an in-field expansion. SVC installations are designed for field expandability: In this case, the system can be expanded to a 15-step SVC with a rating up to 6 MVAR by the addition of three static valves and suitable capacitors.

Since the third mine has not yet started, this SVC design proved useful.  The REA did not invest in unneeded capacity.

In 2014, the two mines expanded.  T-Star, working with the customer, was able to:

What did they get for their money?

Reliability-The SVC has been performing flawlessly since 2006.

Performance-Sag is reduced to acceptable levels.

Peace of Mind-We stand behind our products.

The customer preferred this solution over a soft-starting system because a soft starter was unable to satisfy utility sag requirements. Also, a soft-starter would not reliably start the motor. A VFD was not considered for starting due to high cost and complexity. The refinery needed flawless and reliable performance. Process shut-downs were unacceptable.

Active browser-based display showing 30 seconds of real-time operation on standard controller screen. The welding patterns do not repeat and each phase operates independently of the other 2 phases.

This chart is derived and shows how each of the 3 phases react differently in order to maintain a stable 3-phase voltage.

Based on this information it is not surprising that the unit operates nearly continuously on each of the three phases.

The high number of switching operations requires a rapid and accurate controller as well as a system that is able to switch billions of times without excessive wear and tear.

Operational success is defined here as meeting agreed-upon performance standards for reliable operation.  Some of these standards include:

NOTE:  Actual event response time varies based on the phase angle at the time current flow triggers a response.  The responses shown at above and at right approach the theoretical maximum response time for this event.

We can help!
Get in touch